skip to main | skip to sidebar

Day 1 – 8/12/12
The Djibouti formalities were completed efficiently and quickly. The drive was much the same as in Ethiopia, lots of trucks and a barren, desolate landscape.
Initially, the road deteriorated with lots of potholes. ~ 52 km from Djibouti City, the EU has kindly constructed a better road.
We had booked a couple of points nights at the Sheraton, but decided to try our luck for an extra night on arrival. The super helpful folks at the hotel pulled out all stops and got a room on points for us. A bit of luxury, a/c and showers.

Day 2 – 9/12/12
Not a good nights sleep. The Italian marines in the next room decided to party all night. It all got too much with the prostitute’s yelping at 04:00 and Avril got the manager to sort it out.
We drove to Lake Assal. Lonely Planet says this is the lowest point in Africa – it also says this about the Dallol Depression, in the same publication. The drive is back towards Ethiopia to the 52 km mark, the take the turn to the Tadjoura and drive on the excellent tar road for 39 km. There is a clearly marked turn to the Lake and then 17 km of very poor, badly potholed road.
The Lake is probably has more geographical interest than tourist appeal. It is a blue/green colour with salt precipitating at the edges. Local folks are on hand to sell you some salt of carious crystals.
We had a lazy afternoon in the hotel – but changed rooms! 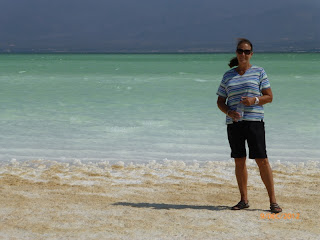 Day 3 – 10/12/12
Ray was up early to have the vehicle serviced at the Toyota garage. At the service center, a new Renault showroom was being opened by a high dignitary, so there was military security and lots of hum around. The service was professionally carried out.
Otherwise, we spent the day relaxing and doing emails etc.

We had to decide on our route to Hargeisa, the capital of Somaliland. Our original idea was to drive the route in Somaliland. The guide book says this is 2 days by car (night driving) and this was confirmed by one of the chaps on the Danakil tour. However, we could not get accurate information on the route, whether we needed to take a guard for the whole trip (an issue as we only have 2 seats) etc. After some thought we opted for the more certain route, back to Ethiopia and then to Somaliland. It seemed to be about the same duration and all the local folks in Djibouti recommended against the Somaliland route. Maybe we are just cowards!

Day 4 – 11/12/12
The Lonely Planet guide said that it was a rough 10 – 12 hour drive to Dire Dawa, so we were up early to ensure we got to our destination before dark.
We quickly got to the border crossing near Ali Sabein. Along the way we passed a very large European military exersize with loads of armoured vehicles and such.
The crossing into Ethiopia was completed without any real hassle. The customs bloke had already had his daily allowance of chat (the local “mildly” narcotic drug) so getting his attention and our carnet stamped was amusing.

Djibouti Summary
We were only in the country for a few days, so any observation must be superficial. The Djibouti people did not beg and kept their livestock off the roads. It was very nice to be somewhere where the locals do not beg. At one point, when we were stopped at traffic lights, a kid came to the car, however a local chap on the pack of a ute in the next lane told kid off and shooed him away.
We did not see any of the “French Influence” that the guide book talks about.

Day 16 – 11/12/12
Our immigration formalities were completed very quickly. But, the customs folks decided to make our lives difficult. For the 1st time on the trip we were forced to open up the rear accommodation module. Then they wanted to look at everything, including our safe. They wanted to count our money (Lonely Planet says there are no currency import restrictions) etc. All a hassle, but we kept our cool and eventually were on our way. So much for the previous thought of the Ethiopians welcoming tourists.
The made road ended at the Djibouti border. The gravel road to Dire Dawa varied from dreadful to OK (ish). The 215 km in Ethiopia took 4.5 hours. At one point we were stopped at a road block and asked for 200 Birr, the reason being we did not have Ethiopian number plates. Some discussion ensued and then one of the chaps asked if we were Diplomatic Corps – “of course”. So, we proceeded through with out payment or further debate.
We booked into the wonderful African Village, a real garden oasis. Clean rooms etc. It is run by Pentecostal folks, so unmarried people cannot share rooms and there is no alcohol. A small price for the nice setting.

Day 17 – 12/12/12
After chatting to the kids over Skype, we set off for Somaliland. The road via Harar and Jijaga all the way to the border is new high standard tar. As always with Ethiopia, the scenery was memorable. Immediately after Dire Dawa there were terraces hills, then a valley with unusual rock formations and finally into some open plains.
There seemed to be less general hassle in this area; still pedestrians and stock on the road and crowded villages, but virtually no begging and no “you, you you” chant.
Border formalities were completed quickly – with immigration requiring an exit photo and finger prints.

Somaliland
Day 1 – 12/12/12
We were greeted with “welcome to Somaliland” and a smiling immigration officer who made it his personal business to get our immigration (with photo and finger print) and customs formalities completed quickly.
The road for 20 km immediately after the border is 4WD, but with lots of local normal sedans plying the route. We were lucky enough to see a jackal along this section.
After the dirt there is a reasonable standard tar road (no potholes) all the way to Hargeisa, but with some vicious, unmarked speed bumps.
We had expected desert, but to our surprise, whilst the land is arid, this is quite thick scrub and some crops being grown. More intense agriculture than we would have thought.
Oddly, most (> 80%) of the vehicles are right hand drive, even though they drive on the right hand side.
We looked around for other hotels mentioned in the blogs, but could not find any, so settled on the Oriental Hotel where almost all bloggers tend to stay. It was fine, except that a prayer/mosque loud speaker was 100’ from our room. Sleep deprivation, again.
After settling in we went to look for the Ministry of Tourism, but we were too late for it. Ray was treated with some distain by the gate guard, apparently because he had shorts on.

We then went for a bit of a walk around town. We were the object of everyone’s interest. Some folks took a coy glance and others were openly staring. We are used to this, but here it was a bit more intense. However, most people were friendly, with the older women more than willing to share a bit of a joke.
When we were almost back to the hotel a couple of youths (maybe ~ 16yo) said to Avril that she should cover her hair (she had put on long pants and a top to cover her shoulders). We tried to talk to them, but it was clear that there was no reason here. A crowd had gathered and one of the lads said Avril should cover her hair to prevent violence. Nice. We have been in > 15 Muslim countries, lived and worked in a number and this was the 1st time we had experienced prejudice or hostility. We just returned to the hotel. We did see 2 other European women and both had caftans and head scarves. One of the women said that even though she had a scarf over her hair, her fringe was showing and as she walked through the market some one flicked the fringe.

After a long negotiation with the hotel management, we arranged a vehicle, guard and permits for the Las Geel rock paintings. $25/person entrance. Guard, driver and vehicle $ 80. There was some suggestion that we did not need a guard any more, but the hotel insisted that we did. Hence, as we only have 2 seats in our car, we would have needed a car for the guard anyway.

Day 2 – 13/12/12
Needless to say, given the strict Islamic nature of the country, we had a short night’s sleep. Here, they broadcast all the prayers, not just the call to prayer. And, in the evening this lasted > 2 hours. At breakfast we met a young German who described how, when he arrived at the bus station a group of school children had approached him and asked his religion. When he said Christian, they made throat cutting motions with their hands. Interesting.

It is 51 km to the Las Geel track turn off. The road is poor asphalt, with lots of pot holes. There were a number of police check points along the way. So, assuming one needs a guard, it would be quickly discovered that you did not have one.

There is a very poor dirt track to the site and a police guard ~ 500m before the site. At the foot of the massif,there is a small, interesting information display in a hut. Good access has been provided to the paintings. The paintings themselves are impressive. There are about 6 shelters (overhanging rocks). They consist of cows (not bulls) apparently without heads but with a colourful rectangle in its place, people (large bodies and legs but small arms and heads) and dogs.
The site setting is gorgeous, with great views over the surrounding countryside. Avril says just like the Magaliesberg.
Well worth the trip.

On return Ray went out to buy some lunch and was assisted by everyone. So, maybe the youths yesterday were just an aberration. Hopefully.
We lazed in the afternoon and did some computer stuff. 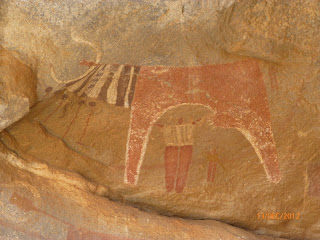 Day 3 – 14/12/12
As it was Friday, the chef decided to go to prayers and there was to be no breakfast (included in the price) at the hotel. TIA. Interestingly, with no males around, one of the (female) house keepers took the opportunity to chat to us. She said that the folks in Somaliland do not respect differences. She kindly organised some breakfast. After breakfast, we started back to Ethiopia.
We had an easy run back to the border and a simple crossing.

Somaliland Summary
This non-country clearly has a functioning government with civil works being carried out, lots of phone towers and a strong retail sector (it seemed to us they had better shops than Addis). Apparently it is a reasonable democracy and has a free press.
What do you say after 2-3 days? Most of the people were very welcoming. However, this is the most conservative Muslim country we have been to. There were NO women without long, drab head covering and lots with just the eye slit in the front. This was so, even for very young tots. Clearly clothes are a big issue for both men and women.
For overlanders, it does seem that apart from the Ethiopia – Hargeisa road, security (an armed soldier) is needed. This is an issue for us as we only have 2 seats. Hence, we did not bother to go to Berbera and the beach (we probably could not have gone for a swim anyway).