skip to main | skip to sidebar

RSA... to the conclusion.

Day 23 to Day 25 – 25/4/13 to 27/4/13
After returning from our “final” driving and camping run, we spent a few days in Pretoria cleaning the vehicle. Knowing that the Australian customs are rigorous, we removed everything from the vehicle and cleaned it thoroughly. We took the vehicle to vehicle detailers – twice!! We removed the accommodation unit and cleaned the tray etc.
Every nook & cranny in the vehicle was cleaned at least twice.
We suspect this will not be sufficient – but we gave it our best shot.

Day 26 – 28/4/13
We drove down to Durban. We had forgotten what a pleasant drive this was – after the flat Highveld. The hills were very scenic and in the distance the Drakensburg Mountains already had snow.

Day 27 – 29/4/13
THE day. We drove to yet another vehicle detailing place, recommended by F.A.T.S and had the vehicle cleaned – again. It was then sprayed with an enzyme solution(?!). We drove to F.A.T.S premises to drop the vehicle off. The folks at F.A.T.S were again fantastic and took care of all the details.
After lunch we flew back to Johannesburg.

According to the Odometer, we had covered 90,968 km since we started on 5/9/2011. The GPS shows ~ 4,000 km more. This may be due to inaccuracies in the odometer, plus we used slightly oversized tyres for a time. Also we had hired vehicles in Morocco and South Africa and went on tours in Chad and Tanzania. So, our overall klms probably approached 100,000.
We have visited 48 countries (including 5 in Europe)
A proper conclusion will follow later. 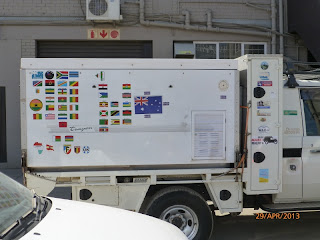 Day 31 to Day 32 – 3/5/13 to 4/5/13
We drove (hire car) to the Klaserie Game Reserve, on the border with the Kruger National Park be part of the celebration of James & Cheryl’s marriage ( Cheryl is the daughter of Avril’s bridesmaid, Jenny). It was a truly stunning affair at their private lodge.
We camped at Gary Freemans safari camp on the banks of the Klaserie river. Gary took us on a number of game walks and drives. We were lucky enough to see elephant, impala, lions, squirrels, buffalo, giraffe (including a very new born calf), warthog (on the way out) and hyenas. Other couples at the camp were keen birders, so there was an emphasis on this. 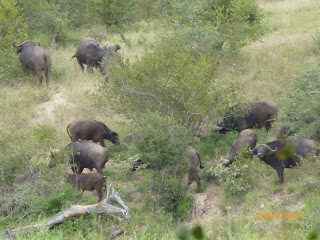 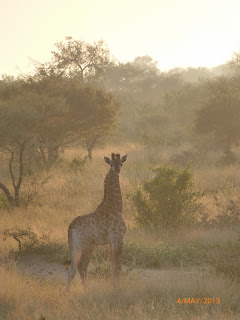 Day 35 to Day 37 – 7/5/13 to 9/5/13
We flew to Cape Town, hired a car and drove to Swellendam. The mountain scenery to the east of Cape Town is almost as spectacular as that to the north. We drove through some high mountain passes that gave excellent vistas across the country. Interestingly, the rain fall here is not that high ( ~ 15”/annum) so we passed through mainly grass lands and scrub. Most of the land is cultivated for grain and sheep.
We stayed with Koos and Marlene, friends from the trip through Angola, in Swellendam.
Swellendam is the 3rd oldest town in RSA. It is set in the Breede River Valley and is very pretty. It is also blessed with excellent infrastructure and tourist facilities, restaurants etc. We of course had the very best guides. Koos took us to the local Bontebok National Park. We were surprised at the amount of game in the area. It seemed that the farmers had left tracks of indigenous vegetation along the valleys, hill tops and rocky non-productive areas and game has survived there. We saw a grysbok, a zebra, springbok and a rabbit.

We went on a scenic drive to Barrydale high in the hills, via another spectacular mountain pass. We also took the opportunity to visit the father of Australian friends, who live in this area.
Koos drove us to Cape Aghulas the most southerly point on the African Continent.
One evening we dined with Christo & Salome, who are also friends from the Angola trip.
We had a great time catching up and we hope that we can welcome them to Australia one day. 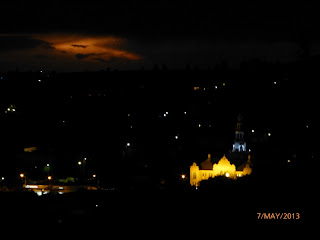 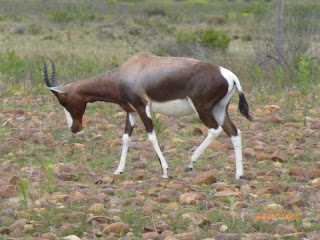 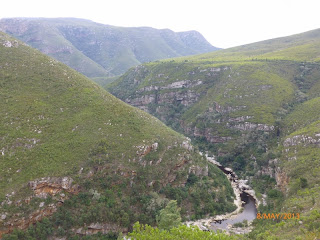 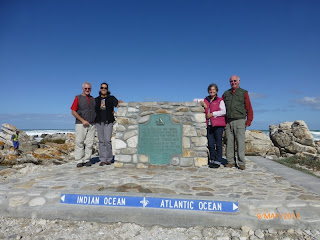 Day 38 to Day 40 – 10/5/13 to 12/5/13
We spent time in Cape Town catching up with friends and relatives.
Val (a good friend of Avril’s from uni days) & her husband, Keith took us to the fabulous Uitsig winery/restaurant. One gender set managed to drink a bottle of wine each. The other gender set… chauffeured. 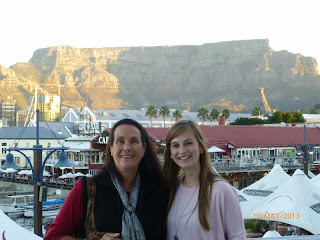 Day 41 to Day 47 – 13/5/13 to 21/5/13
A time of reflection and relaxation.
We met up with Rod & Tamara Cassidy, owners of Sangha Lodge in CAR. They were forced to leave during the recent coup there. They escaped to the Republic of Congo and were classed as War Refugees. Fortunately their lodge has survived the looting, so fingers crossed they will be back in action soon.
On a not so good note, without the National Park officers and WWF, Dzanga Bai has become a killing ground with poachers from Sudan moving in to slaughter the elephants for the ivory. You may remember when we were there, we saw 110 elephants in the bai at the same time, socializing around the water holes. We feel sick when we think about what the poachers are doing, to say nothing about the agents transporting the ivory worldwide
Rod and others have started a petition to try and do something about this:
http://www.avaaz.org/petition/STOP THE ELEPHANT GENOCIDE IN WORLD HERTIAGE SITE DZANGA CLEARING CENTRAL AFRICAN REPUBLIC

RSA Summary
We loved our time in RSA. The people we met were friendly, hospitable and generous. After the indifferent to appalling roads in the rest of Africa, the roads in RSA were (with a couple of exceptions) in very good condition. It was wonderful to be able to drink the water, flush the loo and flick the light switch and get … light! The camp grounds we stayed in were all very good, well appointed with good abolitions & hot water.
The food is fantastic, with great ingredients from the shops (brilliant meat) and the restaurants were generally well presented. Of course, the wines have a well deserved international reputation. And: with the strength of the A$, the prices for were ridiculously low.
There is a free and robust press.
There is a vibrant and very active theater scene and Graeme took us to many shows.

It does appear there is a significant break down in law & order. This starts at the top with some outrageous political corruption, cronyism & nepotism (at all levels of the political system from the President to local councils). The police appear to be corrupt (with discussions on just how much police perjury there is) and dysfunctional. There continues to be significant personal safety issues. At the lowest level, there is basically no adherence to road laws, with speeding and talking on the phone whilst driving etc endemic.

The country is totally obsessed with race. It is a pity that RSA does not seem to be able to avoid the path that most other African countries followed when they obtained democracy. It seems they will need to go through the cycle of “big men”, corruption, effective disenfranchisement of the population, poverty (relative to what could have been achieved) before the leadership look for what is best for ALL the population.
Posted by Avril & Ray at 07:07